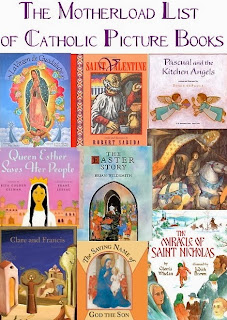 Here is my personal, comprehensive list of excellent picture books that help nurture a love for the Catholic faith and Christianity in general. This is just my opinion, mind you.  There are certainly other Catholic books out there but I have been pretty selective in highlighting only ones that I either have or would buy myself. You won't see ugly or inane books on this list; I don't think we should buy/read "twaddle" even if it comes packaged as a "saint story."No sense in dumbing down the beautiful!  However, there are a couple compromises on this point... only because either the pictures or the text are in and of themselves absolutely worth your time. This used to be a post linking you to my Listmania lists on amazon.com but they limit you to 40 titles.  :-) I also left out the entire St. Joseph Picture Books series (which admittedly do have their place, especially being thin, cheap and Mass-friendly), as well as most Christmas books since that genre is too big for my purposes here, another time maybe...  I'm interested only in STORY picture books here, that happen to reinforce specifically Catholic/Christian values.  I starred *books that are my own very special favorites. Either way, enjoy the list!

St. Columba
Across a Dark and Wild Sea
Man Who Loved Books

Other Irish Saints
The Blackbird's Nest: Saint Kevin of Ireland*
The Ravens of Farne: A Tale of Saint Cuthbert
The Life of Saint Brigid: Abbess of Kildare
The Saint and his Bees (St. Modomnoc)
Saint Ciaran: The Tale of a Saint of Ireland

Misc. Saints
A Saint and His Lion: The Story of Tekla of Ethiopia
St. Jerome and the Lion
Pascual and the Kitchen Angels*
The Wonderful Life of Saint Sergius of Radonezh*
Saint Brendan And The Voyage Before Columbus*
Peter Claver, Patron Saint of Slaves/Pedro Claver, Santo Patrono de los Esclavos
John Mary Vianney: The Holy Cure of Ars
Bernadette: The Little Girl from Lourdes
Lucia, Saint of Light
The Little Friar Who Flew (St. Joseph of Cupertino)
Saint Jude: A Friend in Hard Times
Saint Felix and the Spider
The Secret World Of Hildegard
Mother Teresa
Yes! The Life of Blessed Josemaria for Young Readers*
Lolek - The Boy Who Became Pope John Paul II
Roses in the Snow: A Tale of Saint Elizabeth of Hungary

Bible Stories
Old Testament
Creation
Paradise
Noah's Ark*
Noah's Ark
The Tower of Babel*
Exodus*
Sarah Laughs
Moses: The Long Road to Freedom
Moses
The Angel and the Donkey*
Jonah and the Whale*
The Book of Jonah
The Story Of Ruth
The Story of the Call of Samuel
Jacob and Esau
Joseph
Benjamin and the Silver Goblet*
The Coat of Many Colors
David and Goliath
The Wisest Man in the World
Kings and Queens of the Bible
Old Testament Rhymes
Queen Esther Saves Her People*
The Story of Esther: A Purim Tale
Daniel and the Lord of Lions
The Lord is My Shepherd
To Every Thing There Is A Season*

Prayers/Faith
The Saving Name of God the Son *
The Weight of a Mass: A Tale of Faith*
Twice Yours
I Believe: The Nicene Creed
The Lord's Prayer
This Little Prayer of Mine
This Is What I Pray Today: Divine Hours Prayers For Children
Prayer for a Child
If Jesus Came to My House*
If Jesus Came to My House (newer edition)
A Child's Rule of Life
Friendship with Jesus: Pope Benedict XVI Talks to Children on Their First Holy Communion
A Is for Altar, B Is for Bible
Our Holy Father, the Pope: The Papacy from Saint Peter to the Present
Manners in God's House: First Prayers and First Missal
I Believe: The Creed, Confession and the Ten Commandments for Little Catholics
Just For Today*

Misc.
Brother Hugo and the Bear*
The Miracle of St. Nicholas*
Brother Bartholomew and the Apple Grove
The Clown of God*
The Little Juggler*
The Acrobat and the Angel
The Monk Who Grew Prayer*
The Little Rose of Sharon*
The Princess and the Kiss: A Story of God's Gift of Purity
The Squire and the Scroll
Brother William's Year: A Monk at Westminster Abbey*
Joseph's Hands*
Sister Anne's Hands
The Tale of Three Trees: A Traditional Folktale
Song of the Swallows
Joseph and Chico: The Life of Pope Benedict XVI as Told by a Cat
Max and Benedict: A Bird's Eye View of the Pope's Daily Life

“After nourishment, shelter and companionship, stories are the thing we need most in the world.”
-Philip Pullman

“She is too fond of books, and it has turned her brain.”
-Louisa May Alcott